On Thursday, June 21, the St. Boniface Heritage Garden officially opened a recognition space in honour of the Métis Nation. The landscaping and the interpretive panels have been designed by two Métis women: architect Janelle Fillion, and artist Candace Lipischak. The Archdiocese of St. Boniface invites you to come and explore the grounds of the Archbishop’s residence that pay homage to those who played an important role in the development of the St. Boniface Mission, including the significant role that the Métis Nation has played in Manitoba’s history. His Grace Albert LeGatt, Archbishop of St. Boniface declared: ‘As we seek the path of reconciliation, peace and friendship, we hope this space in the St. Boniface Heritage Garden will be one of many gestures on the path to healing where pain or hurt has been brought to others, by asking for forgiveness, and committing ourselves to walking together into the future.’ In the traditional territory of the Assiniboine, Anishinaabe and Métis,

and historic river front property of the Archdiocese of St. Boniface

View photos of the Celebration: Rededication of the Fountain in the Heritage Garden 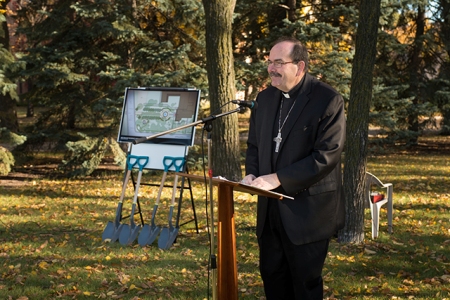 A new Heritage Garden is being developed in the heart of Winnipeg across from the Historic Forks and the Canadian Museum for Human Rights. A ground-breaking ceremony took place on October 13th, 2015 to launch the project. Archbishop Albert LeGatt stated “the archdiocese of Saint-Boniface is pleased to offer the green space in front of the archbishop’s residence to create a heritage garden that will render homage to the Church’s heroes, and other individuals who played major roles in the history of this province. It is with great pride and recognition that we honor these individuals and religious congregations of men and women”. 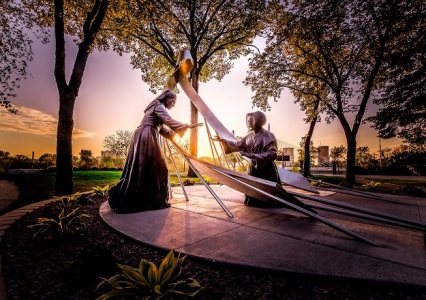 The garden includes a node that pays tribute to the fifty (50) Catholic Women Religious congregations who have played a great role in the development of Manitoba’s health, education and social service systems. It is comprised of a commemorative monument, interpretive panels and benches that look out onto the Winnipeg downtown skyline. This area was officially inaugurated on June 20, 2016 as part of the Legacy of Care, Courage and Compassion initiative spearheaded and financed by the Catholic Health Association of Manitoba and its project sponsors. 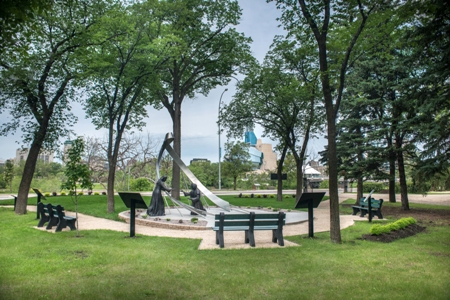 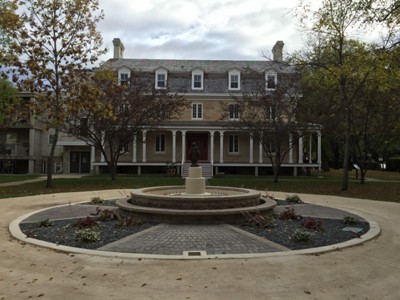 A second area is being dedicated to Western Canada’s first missionaries, the Oblates of Mary Immaculate, who arrived in 1845, and were instrumental in the foundation of many mission communities throughout Manitoba, the North and Western Canada. An important part of the Oblates’ mission was to also educate and share the written word, as well as create and publish newspapers, dictionaries and books in a variety of languages. The garden node dedicated to the Oblates consists of the fountain that has been restored, interpretive panels, and benches. A dedication ceremony is taking place on October 25th, 2016 as part of the Oblates of Mary Immaculate bicentenary celebration.

This landscape project has been made possible through the financial support of the Province of Manitoba’s Community Places Program and a Crowdfunding campaign that is still on-going. 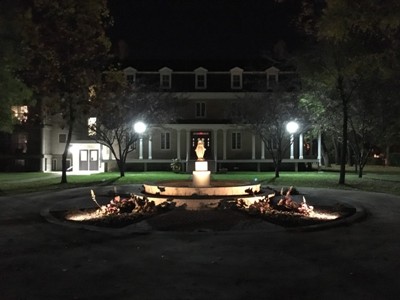 The first phase of a prayerful contemplative area, consisting of a beautiful polished 52’’Indonesian marble statue of the Virgin Mary, is being developed on the southeast corner of the Archbishop’s property. This statue was donated by Vietnamese members of the diocese, many of whom came as refugee boat people in the 1970s and 1980s. We hope to be able to complete the embellishment of this area in the New Year with the support of the community.

The property of the Archdiocese is on the traditional territory of the Indigenous and Métis peoples. Other developments for the St. Boniface Heritage Garden are currently being discussed and committees have been put in place to see how we can pay tribute to both groups who have played such important roles in the history and development of this province. Updates on this initiative will be communicated in the New Year.

We sincerely thank all individuals and religious congregations who have donated to the Crowdfunding campaign, and invite anyone who would like to contribute to assist in developing further the St. Boniface Heritage Garden to do so. If anyone would like to make a donation, please contact Julie Turenne-Maynard at 204-925-2321 or via email at consultjtm@mymts.net.

The Archdiocese of Saint-Boniface has contributed financially for the conceptual design fees of the garden, and will see to the on-going maintenance of the property for years to come.