Code of Conduct for Clergy 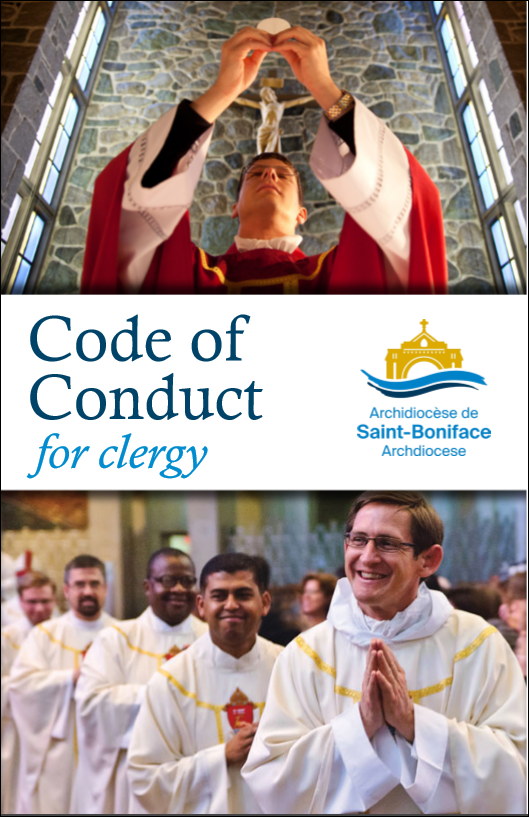 This code is the fruit of a series of discussions over several years at the level of the Diocesan Council of Priests and hopefully also at the level of your deanery. The consultation and discussions around this subject first surfaced at the Council of Priests on September 25, 2014 and were thereafter pursued until the meeting of June 9, 2015, at which time it was adopted unanimously by a bishop-in-council decision.

The rationale for producing and implementing such a Code of Conduct includes several elements:

i. All professional bodies (clergy are professionals) in our society are doing so to clarify the rights and responsibilities of both those being served and of those who do the serving. By due diligence we must do the same.

ii. The Archdiocese of Winnipeg issued its own Code of Conduct in 2009.

iii. It is in the same spirit as our Diocesan Protocol for the Protection of Children, Youths and Vulnerable Adults: Working Together for a Safe and Respectful Environment. In fact, many liability insurers now require a Code of Conduct before being willing to extend coverage protection to organisations such as ours.

iv. The Canadian Conference of Catholic Bishops is working on clarifying roles and expectations in regards to many aspects of priestly ministry and especially the attendant measures of accountability to assure both transparency and justice to the People of God. These measures include how the individual priest, the presbyterate in a diocese as a whole and finally the bishop and his administrative and canonical structures assure an open and holy ministry to those entrusted to his care as chief shepherd of the diocese.

The goal of course is that through education, ongoing formation, listening to the People of God and responding both individually and collectively, all the clergy of any diocese fulfill the mission of Christ in a way that assures the safety, security and well-being of those we serve. It’s all about building even greater mutual trust between clergy and lay faithful to best advance the Kingdom of God and the mission of Christ.

For any allegations of abuse against a cleric, victims or others are encouraged to call: